Breaking Up With Ubuntu

After using exclusively for more than seven years, I'm breaking up with Ubuntu.

I got a new laptop, turned it on, got rid of Windows, installed Ubuntu and fast forward a week I'm still struggling to set up the video driver and audio driver. My clients are tired of waiting for my computer to get fixed, emails have started to pile up, and at this moment I remember the statistics of Linxu being popular among college students only.

I've listed several bugs here which have been haunting me, but none of these is the reason for giving up on Ubuntu. Every software has some bug and, with time they will get fixed along with welcoming new ones. I'm giving up on Ubuntu because of the change in vision of Canonical. They are trying to do everything that any other big companies are doing, Ubuntu one, Ubunt Phone, Ubuntu tablet etc. This is fine, but you need to have a solid foundation beforehand you start experimenting with other products. Ubuntu on a desktop is not perfect. Instead of making this work for people who are willing to use it, they are trying to create something for people who may or may not use it.

Ubuntu is not perfect and let me list some of the bugs.

My computer is Dell Inspiron 7520 SE. It comes with hybrid graphics card: Intel 400 and AMD 7730M. Natuaraly To enable AMD graphics card I enabled fglrx driver from additional drivers. But after restart my laptop started in low graphics mode. Turns out there is a bug: http://askubuntu.com/questions/210040/unity-does-not-start-after-installing-the-fglrx-drivers https://bugs.launchpad.net/ubuntu/+source/fglrx-installer-updates/+bug/1069199 https://bugs.launchpad.net/ubuntu/+source/fglrx-installer-updates/+bug/1068404

So my second attempt to get it working was by following this: http://askubuntu.com/questions/192381/how-to-turn-off-ati-radeon-hd-7730m-on-dell-inspiron-7520 . I managed to turn off the AMD graphics card but with consequences. Now my computer would take forever to start up, to log in and to log out. Here is the dmesg output:

Look at the time taken.

Not only this, trying to switch graphics card would result in low graphics mode again. Even if it had worked I had to log out and log in. While in Windows graphics card can be turned on or off depending on applications without logging in and out. Ubuntu should focus on issues like this. How easy is it on Windows to work with switchable graphics card. It is absolutely transparent. Just assign which application uses which card.

AMD driver is also supposed to fix fan speed. By default the fan runs on full speed constantly. Luckily for me unlike this guy, http://askubuntu.com/questions/251705/dell-7520-inspiron-15r-se-fan-on-full-speed-on-12-04-12-10-13-04 the video driver somewhat fixed the fan speed. By somewhat I mean fan would switch between normal and full speed mode but was still very noisy compared to Windows. I realize that after installing Windows I barely hear the fan and my laptop also runs a lot cooler. One major bug with fan speed on Ubuntu was even if my computer was under high load the fan would run in low speed mode if my computer was left on idle. The laptop would get pretty hot after I come back. My last laptop died because of the heat issue: http://techspalace.blogspot.com/2011/05/this-is-hot.html . I don't want to take more risk.

Another major problem is noise in the microphone. I've already tried all the solution available, but still while using the microphone there is static noise in the background. This means no Skype or Viber from laptop. http://askubuntu.com/questions/311624/microphone-noise-problem

Beside two of this major problem I've some annoying problem with WiFi.


And few other minor annoyance:


Active window focus lost: I’m working in gimp while watching Cricket in Chrome. After working with any dialog box in gimp the focus is lost to Chrome. So I press some keys intended for gimp but it is taken by Chrome.

Keyboard shortcut settings: After hours of trying to figure out why my custom keyboard shortcuts were not working I found out that the changes I make isn’t being saved. I’ve to delete the shortcut and recreate it. Simply editing the existing one and clicking save doesn't work.

Volume slider: Why do they work the opposite way even though I’ve disabled content sticks to fingers in mouse setting.

Make things simple by removing essential functionality: Why do I’ve to go through gconf-editor to enable horizontal two finger scrolling?

Brightness: After restart, the brightness setting is usually lost.

Bluetooth: Bluetooth gets turned on after every restart.

USB device not working after suspend: My WiFi adapter and USB Internet dongle doesn’t work after suspending the laptop. I’ve to re plug them.

Scrolling in HD screen: It is a pain. How to change the scroll speed in Ubuntu? The only solution I found for Chrome is this http://askubuntu.com/questions/118283/change-mouse-wheel-scroll-speed-in-chrome-on-12-04-edit-starter-bar-commandline which unfortunately is already depreciated.

Notification on battery mode: No notification while switching from the power adapter to battery power. So I’ll never know when I’m running on battery until I put my eyes on the indicator and suddenly realize I only have 20% battery left. And Canonical wants to create OS for a phone.

Windows title bar not clickable with programs like VLC: https://bugs.launchpad.net/ubuntu/+source/compiz/+bug/1179247

USB powered on in suspend mode: USB ports are powered on even when the laptop is suspended. This requires me to unplug all USB devices like fan and speaker etc. every time I suspend the laptop.

Rhythmbox: Rhythmbox crashes or skips through song without playing after pausing playing some game and resuming the music. It also often freezes with 99% CPU usage. 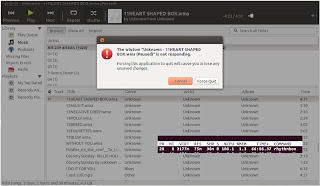 Pulse audio is always using considerate amount of CPU like 10-20%. Not only this even when idle processes like Compiz and Xorg are always consuming good amount of CPU. IIRC in Windows I get 99% idle CPU when my computer is idle.

Nautilus: Newly added bookmarks aren't visible in sidepane. I can see the bookmark in bookmarks menu, but it doesn't show in sidepane. I also can’t remove unwanted items from sidepane like Music and Picture.

The whole point of bookmark is to jump directly there. So I’m trying to export files to my bookmarks folder from apps like gimp, but Nautilus dialog box doesn’t show bookmark forcing me to browse nested path again and again.

Who was that genius person who decided to make the backspace key in Nautilus useless? Is this the part of making things simpler by removing essential functionality?

New Search is horrible. Shows unwanted files rather than the wanted one.

Dialog box: Inkscape, gimp and many others - Keys like enter and ESC doesn’t work for the dialog box. For example in gimp I click Image - Scale Image, type value and press enter, nothing happens even though scale button is highlighted. I’ve to click scale button  with the mouse.

As you might have guessed I've switched to Windows. I think Mac OS X is a better alternative, but I don't have that kind of money.

Advantage of Windows over Ubuntu

For example check this screenshot on how Dell's software tries to protect the health of the battery. 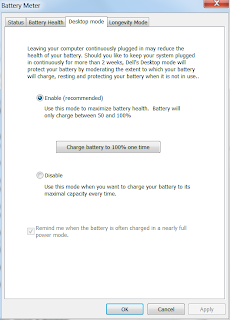 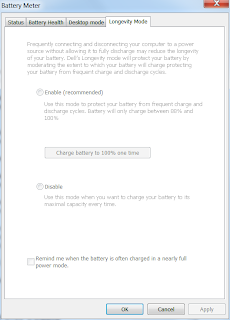 There is also less likely of bugs that will kill your hardware like, remember the famous hard disk click bug that would kill the hard disk under Linux?

The driver is supplied by the manufacturer itself. So you'll always get more value out of your hardware while making your hardware run more safely. For example using Dell's driver and software for my touchpad, now I can use multi touch gesture. 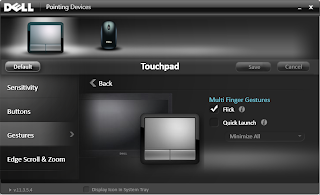 After installing Audio driver, my background noise is automatically cancelled giving me better quality audio with tons of options. 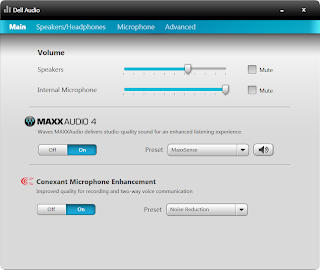 On my old laptop Lenovo Y510 I couldn't watch TV on it as there was never a driver for Analog TV card for Linux.

Most of the feature of Linux or Ubuntu is already provided by other free software in Windows. For eg: check Dexpot. This is a better virtual workspace provider with more features and simplicity to use. Lately,I've been doing Android development and Python development. There isn't any difference while working between Windows and Ubuntu as my IDEs Eclipse, Android Studio and Sublime Text 2 are same on both the platform.

I'm getting nearly twice the battery life I used to get with Ubuntu. So Windows is protecting my batteries health by monitoring different aspects like charge cycle and charge percentage, and it is also giving me better battery life. Check this example of control you can get with Windows to control battery life and then compare this with powertop. 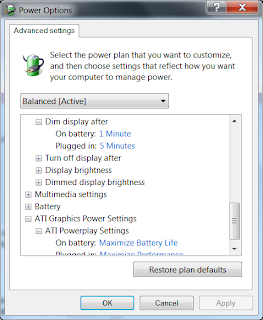