Showing posts from August, 2008
Show all

Roshan Karki Anonymous August 30, 2008
There is a guy called Manu Cornet . He has a wonderful website http://www.whylinuxisbetter.net/ It lists why Linux is better with description. Also it has got reasons why you might still want to stick to Windows. It also lists the way to get Linux. The layout and idea of the website is very cool.
Post a Comment
Read more

Roshan Karki Anonymous August 23, 2008
We can share folders in linux for windows user to access. We can create a share for windows users. To do so first of all install samba . In Ubuntu install it by opening a terminal sudo apt-get install samba Start it by sudo /etc/init.d/samba start You don't need to do this after restart as it gets started automatically on boot. Now create a password for your user sudo smbpasswd -a Share any folder and on windows computer when accessing the share use the above username and newly created password.
Post a Comment
Read more 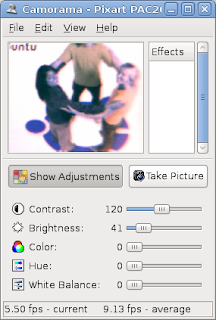 Yesterday I got a webcam whose driver doesn't come with Windows. Fearing to search for the driver I plugged it in my USB and lsusb showed the camera. Quickly I installed three Web camera viewing softwares, camorama, cheese and xawtv. sudo apt-get install camorama cheese xawtv Camorama Camorama had a small preview windows. I tried to preview in small and large mode but it failed. The adjustments were easy to handle. It came with quite good effects. The color correction effects produced better picture out of my dual camera. You can compare yourself the above two pictures. One of the feature of camaroma is auto capturing image. Other feature includes timestamp while capturing photo. You can even put custom message in place of timestamp. When its opened, a tray icon also comes but it has no function. XawTv Should I say I like this application or not? It worked properly but I think its UI is very poor. Instead of saying poor UI you can say its a simp
Post a Comment
Read more

Roshan Karki Anonymous August 05, 2008
A cool video between Windows, Mac and Linux or say Microsoft, OS X and Novel. The Windows and Mac guys try to figure out who is number one thinking there are no other OS. But here you'll see Linux, a beautiful lady clearing there misconception.
Post a Comment
Read more

Roshan Karki Anonymous August 04, 2008
Check osalt.com It helps you to find alternative software for the commercial counterpart. When you move to Open source software this might be very helpful friend for you. Give it a try and see if you are using the best of the open source software.
Post a Comment
Read more

Roshan Karki Anonymous August 01, 2008
Caret ( ^ ) Matches the expression at the start of a line, as in ^A Question mark ( ? ) Matches the expression at the end of a line, as in A? Backslash ( \ ) Turns off the special meaning of the next character, as in \^ Brackets ( [] ) Matches any one of the enclosed characters, as in [aeiou] (Use a hyphen [ - ] for a range, as in [0-9] .) [^ ] Matches any one character except those enclosed in brackets, as in [^0-9] Period ( . ) Matches a single character of any value except end of line Asterisk ( * ) Matches zero or more of the preceding characters or expressions \{x,y\} Matches x to y occurrences of the preceding \{x\} Matches exactly x occurrences of the preceding \{x,\} Matches x or more oc
Post a Comment
Read more
More posts
Linux Developer