Showing posts from December, 2009
Show all

How To Change Mac Address In Linux

Roshan Karki Anonymous December 30, 2009
Q. How can I change the mac address of  network card in my Ubuntu box ? Ans. Changing mac address is very simple. You only need the command ifconfig . Follow the steps below: Open terminal Find the name of your interface, for example eth0 sudo ifconfig eth0 down hw ether aaaabbbb where aabbccdd is the required mac address.
Post a Comment
Read more 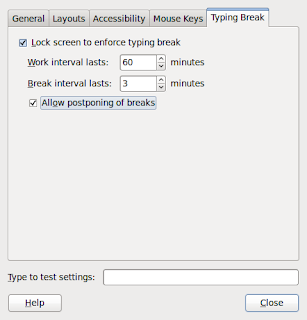 If you use too much computer you may be risking your health. I use computer around 7 hours in 8 hours' office. Before leaving office around 2 and after office around 5 hours. In total that is 17 hours i.e. around 71% of my day. I am sure I don't follow ergonomic principal. What I have started to do is take three minutes break every one hour. For this I use the 'typing break' option in keyboard preferences. After using this for some time I have concluded the following cons and pros: Pros: Nice system tray that blinks few minutes before the break making us ready for the break Option to post pone the break Option to change work interval and break interval If you sit idle the timer automatically resets. That means you have to work continuously in the work interval to be illegible for the break. You leave your computer for few minutes and bang the break is gone. Cons: Screen doesn't lock during the break. So you can't leave your computer in the break for
Post a Comment
Read more

Roshan Karki Anonymous December 09, 2009
Google has finally released the beta version of their chrome browser for Linux and Mac. Previously it was only available from early access channel. Chrome though in beta works very very well and I'm highly satisfied with what I have now. http://www.google.com/chrome If you have installed any pre-beta version of Google Chrome, you need to uninstall it before you can install this beta version. To do so, in terminal type: sudo aptitude remove google-chrome-unstable After that simply double click the downloaded .deb file to install. Also Mozilla Thunderbird has released Thunderbird 3 with tab support. http://www.mozillamessaging.com/en-US/thunderbird/
Post a Comment
Read more